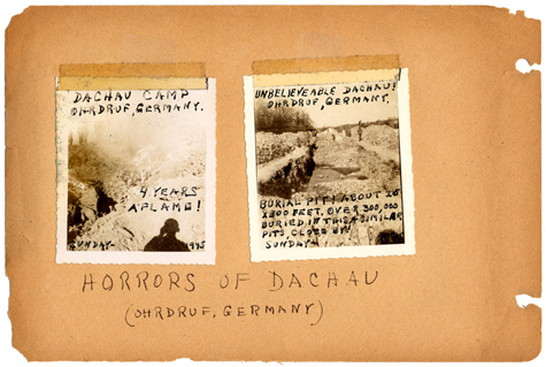 Album documenting the liberation of the Ohrdruf camp, a subcamp of Buchenwald (mislabeled as Dachau).

Ohrdruf, Germany, April 1, 1945. —US Holocaust Memorial Museum, courtesy of Raymond Malenfant
Click here for timeline:  http://www.ushmm.org/learn/timeline-of-events/1942-1945
In a period marked by intense fighting on both the eastern and western fronts of World War II, Nazi Germany also intensified its pursuit of the “Final Solution.” These years saw systematic deportations of millions of Jews to increasingly efficient killing centers using poison gas. By the end of the war in spring 1945, as the Germans and their Axis partners were pushed back on both fronts, Allied troops uncovered the full extent of crimes committed during the Holocaust. USHMM Website
Powered by