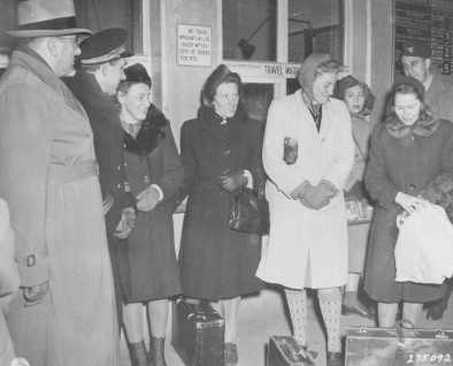 Four Polish women arrive at the Nuremberg train station to serve as prosecution witnesses at the Doctors Trial. From left to right are Jadwiga Dzido, Maria Broel-Plater, Maria Kusmierczuk, and Wladislawa Karolewska. December 15, 1946.
National Archives and Records Administration, College Park, Md.
The Medical Case was one of 12 war crimes trials held before an American tribunal as part of the Subsequent Nuremberg Proceedings. The trial dealt with doctors and nurses who had participated in the killing of physically and mentally impaired Germans and who had performed medical experiments on people imprisoned in concentration camps. USHMM Website


Below are links to videos from the Doctors'  Trials at Nuremberg:

http://www.ushmm.org/wlc/en/media_fi.php?ModuleId=10007035&MediaId=215
Description: "Here, concentration camp survivors Maria Kusmierczuk and Jadwiga Dzido, who had been victims of these experiments, show their injuries to the court as evidence."

http://www.ushmm.org/wlc/en/media_fi.php?ModuleId=10007035&MediaId=214
Description: "Sixteen of the defendants were found guilty. Of the sixteen, seven were sentenced to death for planning and carrying out experiments on human beings against their will. Here, the court announces sentences for defendants Wilhelm Beigleboeck, Herta Oberhauser, and Fritz Fischer."