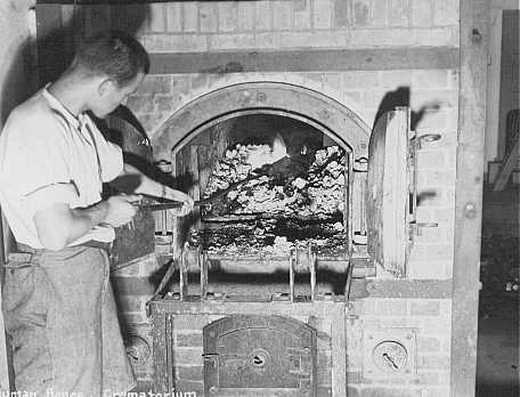 Human remains found in the Dachau concentration camp crematorium after liberation. Germany, April 1945.
— US Holocaust Memorial Museum
"FINAL SOLUTION": OVERVIEW
The Nazis frequently used euphemistic language to disguise the true nature of their crimes. They used the term “Final Solution” to refer to their plan to annihilate the Jewish people. It is not known when the leaders of Nazi Germany definitively decided to implement the "Final Solution." The genocide, or mass destruction, of the Jews was the culmination of a decade of increasingly severe discriminatory measures.

Under the rule of Adolf Hitler, the persecution and segregation of Jews was implemented in stages. After the Nazi party achieved power in Germany in 1933, its state-sponsored racism led to anti-Jewish legislation, economic boycotts, and the violence of the ﻿Kristallnacht ﻿("Night of Broken Glass") pogroms, all of which aimed to systematically isolate Jews from society and drive them out of the country. USHMM website

After the September 1939 German invasion of Poland (the beginning of World War II), anti-Jewish policy escalated to the imprisonment and eventual murder of European Jewry. The Nazis first established ghettos (enclosed areas designed to isolate and control the Jews) in the Generalgouvernement (a territory in central and eastern Poland overseen by a German civilian government) and the Warthegau (an area of western Poland annexed to Germany). Polish and western European Jews were deported to these ghettos where they lived in overcrowded and unsanitary conditions with inadequate food. USHMM website

In the autumn of 1941, SS chief Heinrich Himmler assigned German General Odilo Globocnik (SS and police leader for the Lublin District) with the implementation of a plan to systematically murder the Jews of the Generalgouvernement. The code name Operation Reinhard was eventually given to this plan, named after Heydrich (who was assassinated by Czech partisans in May 1942). As part of Operation Reinhard, Nazi leaders established three killing centers in Poland—Belzec, Sobibor, and Treblinka—with the sole purpose of the mass murder of Jews.

The Majdanek camp served from time to time as a killing site for Jews residing in the Generalgouvernement. In its gas chambers, the SS killed tens of thousands of Jews, primarily forced laborers too weak to work. The SS and police killed at least 152,000 people, mostly Jews, but also a few thousand Roma (Gypsies), in gas vans at the Chelmno killing center about thirty miles northwest of Lodz. In the spring of 1942, Himmler designated Auschwitz II (Auschwitz-Birkenau) as a killing facility. SS authorities murdered approximately one million Jews from various European countries at Auschwitz-Birkenau.


German SS and police murdered nearly 2,700,000 Jews in the killing centers either by asphyxiation with poison gas or by shooting. In its entirety, the "Final Solution" called for the murder of all European Jews by gassing, shooting, and other means. Six million Jewish men, women, and children were killed during the Holocaust—two-thirds of the Jews living in Europe before World War II.  USHMM website
Powered by