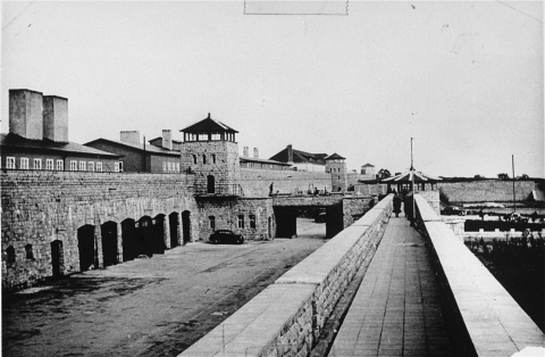 The Mauthausen concentration camp was established shortly after the German annexation of Austria (1938). Prisoners in the camp were forced to perform labor in a nearby stone quarry and, later, to construct subterranean tunnels for rocket-assembly factories.

US forces liberated the camp in May 1945. This footage,
filmed by US cameramen, shows scenes in the camp,
American care of the liberated prisoners, anders, and Austrian civilians loading bodies of victims onto carts for burial.
Click this link for video:  http://www.ushmm.org/wlc/en/media_fi.php?ModuleId=10005196&MediaId=213
Mauthausen

Nazi Germany incorporated Austria in the Anschluss of March 11-13, 1938. Shortly thereafter, Reichsführer-SS (SS chief) Heinrich Himmler, SS General Oswald Pohl, the chief of the SS Administration and Business Offices, and SS General Theodor Eicke, the Inspector of Concentration Camps, inspected a site they thought suitable for the establishment of a concentration camp to incarcerate, as Upper Austrian Nazi Party district leader August Eigruber put it, “traitors to the people from all over Austria.” The site was on the bank of the Danube River, near the “Wiener Graben” stone quarry, which was owned by the city of Vienna. It was located about three miles from the town of Mauthausen in Upper Austria, 12.5 miles southeast of Linz.

At the end of April 1938, the SS founded a company, German Earth and Stone Works Inc. (Deutsche Erd- und Steinwerke, GmbH-DESt), to exploit the granite which they intended to extract with concentration camp labor. In August 1938, the Inspectorate of Concentration Camps transferred approximately 300 prisoners, mostly Austrians and virtually all convicted repeat offenders or persons whom the Nazi regime classified as “asocials” from Dachau concentration camp to the Mauthausen site in order to begin construction of the new camp. By the end of 1938, Mauthausen held nearly 1,000 prisoners, still virtually all convicted criminals and asocials. Three months into World War II in December 1939, the number had increased to over 2,600 prisoners, primarily convicted criminals, "asocials," political opponents, and religious conscientious objectors, such as Jehovah's Witnesses.