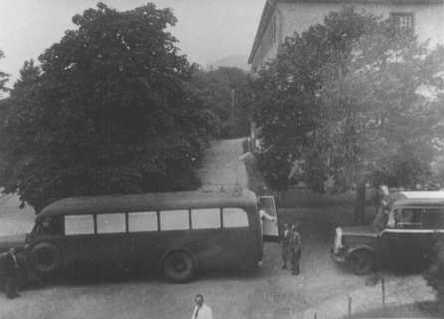 Buses used to transport patients to Hadamar
euthanasia center. The windows were painted
to prevent people from seeing those inside.

Germany, between May and September
1941. Hessisches Hauptstaatsarchiv Wiesbaden
Euthanasia Program
"The term "euthanasia" (literally, "good death") usually refers to the inducement of a painless death for a chronically or terminally ill individual who would otherwise suffer. In the Nazi context, however, "euthanasia" represented a euphemistic term for a clandestine murder program which targeted for systematic killing mentally and physically disabled patients living in institutional settings in Germany and German-annexed territories."

"The so-called "Euthanasia" program was National Socialist Germany's first program of mass murder, predating the genocide of European Jewry, which we call the Holocaust, by approximately two years. The effort represented one of many radical eugenic measures which aimed to restore the racial "integrity" of the German nation. It endeavored to eliminate what eugenicists and their supporters considered "life unworthy of life": those individuals who—they believed—because of severe psychiatric, neurological, or physical disabilities represented at once a genetic and a financial burden upon German society and the state." USHMM website


CHILD "EUTHANASIA" PROGRAM
"In the spring and summer months of 1939, a number of planners—led by Philipp Bouhler, the director of Hitler's private chancellery, and Karl Brandt, Hitler's attending physician—began to organize a secret killing operation targeting disabled children. On August 18, 1939, the Reich Ministry of the Interior circulated a decree compelling all physicians, nurses, and midwives to report newborn infants and children under the age of three who showed signs of severe mental or physical disability. Beginning in October 1939, public health authorities began to encourage parents of children with disabilities to admit their young children to one of a number of specially designated pediatric clinics throughout Germany and Austria. The clinics were in reality children's killing wards where specially recruited medical staff murdered their young charges by lethal overdoses of medication or by starvation."

"At first, medical professionals and clinic administrators incorporated only infants and toddlers in the operation, but as the scope of the measure widened, they included juveniles up to 17 years of age. Conservative estimates suggest that at least 5,000 physically and mentally disabled German children perished as a result of the child "euthanasia" program during the war years." USHMM website


Extending the Euthanasia Program
"Euthanasia planners quickly envisioned extending the killing program to adult disabled patients living in institutional settings. In the autumn of 1939, Adolf Hitler signed a secret authorization in order to protect participating physicians, medical staff, and administrators from prosecution; this authorization was backdated to September 1, 1939, to suggest that the effort was related to wartime measures. Because the Führer Chancellery was insular, compact, and separate from state, government, or Nazi Party apparatuses, Hitler chose this, his private chancellery, to serve as the engine for the "euthanasia" campaign. Its functionaries called their secret enterprise "T4." The operation took its code-name from the street address of the program's coordinating office in Berlin: Tiergartenstrasse 4. According to Hitler's directive, Führer Chancellery director Phillip Bouhler and physician Karl Brandt undertook leadership of the killing operation. Under their auspices, T4 operatives established six gassing installations for adults as part of the "euthanasia" action: Brandenburg, on the Havel River near Berlin; Grafeneck in southwestern Germany; Bernburg and Sonnenstein, both in Saxony; Hartheim, near Linz on the Danube in Austria, and Hadamar in Hessen."
"Utilizing a practice developed for the child "euthanasia" program, T4 planners began in the autumn of 1939 to distribute carefully formulated questionnaires to all public health officials, public and private hospitals, mental institutions, and nursing homes for the chronically ill and aged. The limited space and wording on the forms, as well as the instructions in the accompanying cover letter, combined to convey the impression that the survey was intended to gather statistical data."
"The form's sinister purpose was suggested only by the emphasis which the questionnaire placed upon the patient's capacity to work and by the categories of patients which the inquiry required health authorities to identify: those suffering from schizophrenia, epilepsy, dementia, encephalitis, and other chronic psychiatric or neurological disorders; those not of German or "related" blood; the criminally insane or those committed on criminal grounds; and those who had been confined to the institution in question for more than five years. Secretly recruited "medical experts," physicians—many of them of significant reputation—worked in teams of three to evaluate the forms. On the basis of their decisions beginning in January 1940, T4 functionaries began to remove patients selected for the "euthanasia" program from their home institutions and to transport them by bus or by rail to one of the central gassing installations for killing."
"Within hours of their arrival at such centers, the victims perished in especially designed gas chambers, disguised as shower facilities, utilizing pure carbon monoxide gas. Thereafter, T4 functionaries burned the bodies in crematoria attached to the gassing facilities. Other workers took the ashes of cremated victims from a common pile and placed them in urns to send to the relatives of the victims. The families or guardians of the victims received such an urn, along with a death certificate and other documentation, listing both a fictive cause and date of death."
"Because the program was secret, T-4 planners and functionaries took elaborate measures to conceal its deadly designs. Even though in every case, physicians and institutional administrators falsified official records to indicate that the victims died of natural causes, the "euthanasia" program quickly become an open secret. In view of widespread public knowledge of the measure and in the wake of private and public protests concerning the killings, especially from members of the German clergy, Hitler ordered a halt to the euthanasia program in late August 1941. According to T4's own internal calculations, the "euthanasia" effort claimed the lives of 70,273 institutionalized mentally and physically disabled persons at the six gassing facilities between January 1940 and August 1941."
USHMM website
Powered by