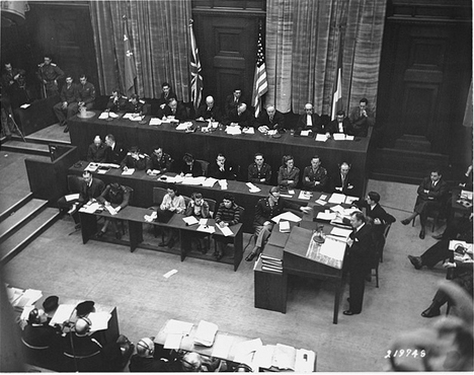 "Brigadier General Telford Taylor was Chief of Counsel, during the Doctors Trial. In Taylor's own words, from the opening statement by the prosecution: "The defendants in this case are charged with murders, tortures, and other atrocities committed in the name of medical science. The victims of these crimes are numbered in the hundreds of thousands. A handful only are still alive; a few of the survivors will appear in this courtroom. But most of these miserable victims were slaughtered outright or died in the course of the tortures to which they were subjected. For the most part they are nameless dead. To their murderers, these wretched people were not individuals at all. They came in wholesale lots and were treated worse than animals."

"In Nazi Germany, German physicians planned and enacted the "Euthanasia" Program, the systematic killing of those they deemed "unworthy of life." The victims included the institutionalized mentally ill and physically impaired. Further, during World War II, German physicians conducted pseudoscientific medical experiments utilizing thousands of concentration camp prisoners without their consent. Most died or were permanently impaired as a result. Jews, Poles, Russians, and Roma (Gypsies) were the most common victims of experimentation."

"After almost 140 days of proceedings, including the testimony of 85 witnesses and the submission of almost 1,500 documents, the American judges pronounced their verdict on August 20, 1947. Sixteen of the doctors were found guilty. Seven were sentenced to death. They were executed on June 2, 1948."  USHMM website