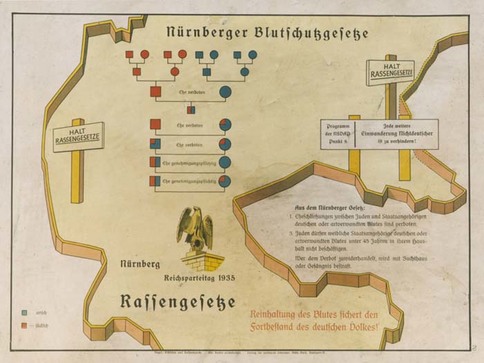 ﻿Eugenics poster entitled "The Nuremberg Law for the Protection of Blood and German Honor." The illustration is a stylized map of the borders of central Germany upon which is imposed a schematic of the forbidden degrees of marriage between Aryans and non-Aryans and the text of the Law for the Protection of German Blood. The German text at the bottom reads, "Maintaining the purity of blood insures the survival of the German people."

— US Holocaust Memorial Museum, courtesy of Hans Pauli﻿
Click here for video: http://www.ushmm.org/wlc/en/media_oi.php?MediaId=5090
TRANSCRIPT
BENNO MÜLLER-HILL-The Euthanasia Program was kind of, different from the earlier programs in that it was not legal, so to speak, it was just a letter of Hitler which opened up the possibility. And if one looks back one has to say that almost all psychiatrists were positive for it, almost all of them.

ANTJE KOSEMUND- Who would have thought in 1933 that handicapped people, ill people, would be murdered? This never occurred to anyone, it was beyond all imagination. I can remember that Irma—unlike my other younger siblings—developed late. She learned to walk late, she always had to be carried around and be fed. She was a pretty child, such a pretty child with big, dark-brown eyes. The sad thing is, at some point Irma disappeared from my family’s memory. My mother, with so many children, always sick, just couldn’t take care of Irma. My father must have visited her in the beginning. The next time I heard about Irma was in 1945. My father told me that Irma apparently died in Vienna. Irma had arrived in this children’s ward with thirteen other children—the youngest was probably three, and Irma was the oldest at thirteen. There they were subjected to illegal human medical experiments. Apparently the children, the victims, were horribly starved, reduced to mere skeletons. In the end, most of them died of exhaustion and hunger, and doses of medicines, or they were given a lethal injection. A worthless life—that’s what they called it. “Worthless life.” That was the official term.

PAUL EGGERT- It looked like a children’s home from outside. Inside it was a children’s concentration camp. The doctor would just wave his finger, the nurse would take notes, every time, five or six children between four and five years old. They had to go to the doctor’s office in the morning and get injections for diphtheria or some other disease. But those children were never seen or heard from again. Then a nurse asked me: “Paul, wouldn’t you like to take the dirty sheets to the laundry?” I thought, why not? I was happy to get out of the place and get some fresh air. I noticed while pushing this cart full of sheets that it was heavier than usual. Then, when no one was watching, I looked under the sheets. There they lay—the dead children who had been killed by injection that morning. I had to deliver them to the laundry, and only a few meters away was a crematory.

BENNO MÜLLER-HILL-If one reads the language which German psychiatrists in particular used about their patients, it’s incredible. They call them todehuellsen,dead, empty cases. Minderwertig—persons of low value and, that’s just normal to use these kind of terrible words. And I think if you all the time you use such kind of bad terms about your patients, then obviously sooner or later you throw them away.

ELVIRA MANTHEY- At 5 ½, I was sent to achildren’s home that cooperated with the Nazis. The children there were declared mentally ill. Behind our dormitory were the babies. And one day I was surprised that I didn’t hear the babies crying anymore. That was in1940. I had been in the institution for two years. Then I looked in, and all the beds were empty. I ran down the long hallway to the other room where the older handicapped were. All of those beds were empty too. And then I was told, ‘Your sister is being taken away’. My sister. I brushed her hair back from her face, hugged her again, and then she was gone. I was devastated. I thought, now I’ll go crazy. And then we were told, “You are all going to leave.” There were only eight children left. The bus was driven into a building, and we had to get out. There were three women and one man. And I got behind the man. Then they yelled, ‘Take off your clothes. Shoes there, clothes here. Hurry!’ ‘No,’ I thought. ‘You’re not taking your clothes off. Something’s wrong here.’ Then she took the smallest child and tore his clothes off, she didn’t rip the clothes, but with one yank up, one down, the child was naked. It was as if I were watching a bad film. I just observed. Then in the meantime other children were undressed and then she took child after child, stood before the table, opened the gas chamber and shoved the children into the gas chamber. Of course I didn’t know at the time that it was a gas chamber, but I sensed danger in there. All of the children are in the gas chamber and I am still standing, fully dressed, behind this Dr. Bunke. He was quite large, so I was overlooked. Then I was yelled at, “Undress right now or you’ll get a beating.” Once I was naked, Bunke grabbed me by the left arm. If this was the table here, I sat there and there was the gas chamber. He pulled me in front of the table. “What’s your name?” “Elvira Hempel.” “How old are you?” “8 years old.” “Get dressed again.”

Benno Müller-Hill, professor of genetics at the University of Cologne and the author of Murderous Science, describes the Nazi "Euthanasia" Program, with oral history excerpts from Antje Kosemund, Paul Eggert, and Elvira Manthey. Antje Kosemund had a disabled younger sister who was admitted to Alsterdorf Institute, Hamburg, December 1933, at the age of three and was subsequently killed in 1944. Paul Eggert was a resident of the orphanage section of the Dortmund-Applerbeck institution from 1942-43 where he witnessed the euthanasia of fellow orphans. Elvira Manthey was taken with her sister from a large, impoverished family and placed in a children’s home, 1938.