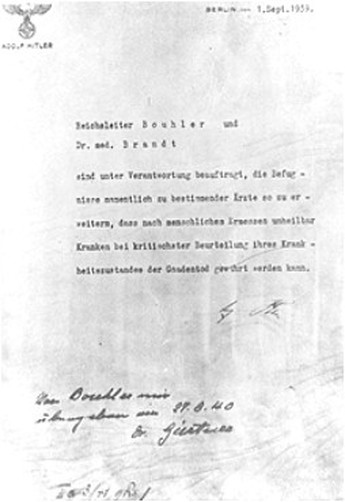 Transcript
Early in the spring months of 1939, members of Hitler's private Chancellery, the so-called Fuehrer Chancellery, headed by the director Philip Bouhler and also by Hitler's private physician Karl Brandt, began to discuss the idea of a secret campaign which would target physically and mentally disabled children living in Nazi Germany. The program would be a secret one and at first would target infants and toddlers.

Relatively early on, there was mass recruitment for the T4 program. They needed doctors, they needed nurses, they needed bureaucratic and technical support, and the staff which was needed to process the victims in a bureaucratic way soon swelled the offices of the Fuehrer Chancellery, which was a very small building in Berlin. And so the central offices of the Euthanasia Program moved to Potsdammer Platz, a very bustling area of central Berlin, and settled in an office on Tiergarten Strasse 4. And the address, Tiergarten Strasse 4, gave the code name for the Euthanasia Program, which was T4.

Conservative estimates suggest that between October 1939, when the first children were murdered at “special pediatric units” (about 30 of them spread throughout Nazi Germany), until war's end in 1945, 5,000 to 7,000 German toddlers, infants, and juveniles, were killed by the secret program though overdoses of medication or actually through starvation.

In January 1940, an adult Euthanasia Program paralleled the murder of German infants and juveniles, utilizing a procedure which had already been developed for the child Euthanasia Program. Administrators of the Euthanasia Program now began to send to all public health officials, to public and private German hospitals, to all German mental institutions, and to homes for the chronically ill and aged, registration forms which were made in such a way to suggest to the medical directors of these facilities that the questionnaire was to gather statistical data. The sinister purpose of the form was suggested only by the kind of person who had to be registered with public health officials, and the emphasis which the questionnaire placed on that person's capacity to work. Those persons who had to be registered with public health officials were persons with severe neurological or psychiatric disorders like schizophrenia or manic-depressive bipolar disorder; persons who had been incarcerated in a mental institution as criminally insane, or who had committed a crime under diminished capacity; persons of “non-German blood,” [gesturing] quote, unquote; and finally, persons who had been in that institution for more than five years.

​Based on the information that came through these forms, public health officials, specially recruited Euthanasia physicians, selected candidates for the Euthanasia Program. And once these candidates had been confirmed by a special board of physicians, also recruited by the Euthanasia planners, these individuals were transferred by bus or by train from their home institutions to one of six T4 facilities throughout Germany and Austria. Within hours of their arrival they were gassed in specially designed gas chambers. Thereafter T4 functionaries removed dental gold from the mouths of these victims and burned the corpses in specially designed crematoria.