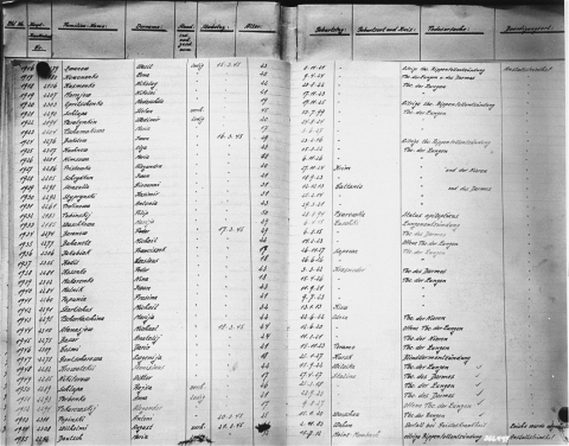 A page of the Hadamar Institute's death registerin which the causes of death were faked to conceal the euthanasia killings that took place there.
The photograph was taken by an American military photographer soon after the liberation.
Click here for video: http://www.ushmm.org/wlc/en/media_fi.php?MediaId=197
﻿GERMANY, 1945
"The Hadamar psychiatric hospital was used as a euthanasia killing center from January until August 1941. Nazi doctors gassed about 10,000 German patients there. Although systematic gassings ended in September 1941, the killing of patients continued through the end of the war. In this footage, American soldiers supervise the exhumation of the cemetery at Hadamar and begin the interrogation of Dr. Adolf Wahlmann and Karl Wilig, who participated in the killings." USHMM website﻿
Powered by