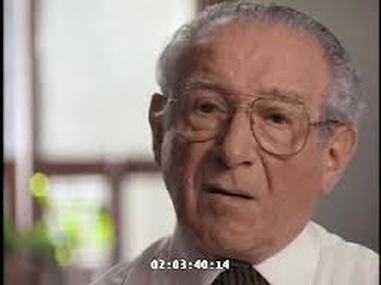 TRANSCRIPT
"They locked us up in the barracks. We were not allowed to go out. And a train arrived and there came some, some people came in this camp. And there was full with guard and all the guards were in, all the Germans and everything, and they took them further down where, where they usually...people arrive and they go and take their luggage. And we heard a lot of shooting. So much shooting and shooting...we didn't know what's going on. The next day they took us to work to separate the clothes, and we're separating the clothes from these people what were shot. They're full with blood...terrible, and...and while we are separating the clothes we...I found in a pocket of one of these, of one of these trousers of...I found a little note written in Yiddish, and it says, "We come from Belzec," what was another camp like that and where the people what did the kind of work that we do. And to liquidate the Belzec [camp], they brought them to Sobibor. And the people knew where they go, so they put [up resistance], so they shot them, they just shot them in the train, so all these people, and they say, and the note says, "We are from there...we know where we go. Take revenge for us."


"In 1939, as Chaim's tour in the Polish army was nearing its scheduled end, Germany invaded Poland. The Germans captured Chaim and sent him to Germany for forced labor. As a Jewish prisoner of war, Chaim later was returned to Poland. Ultimately, he was deported to the Sobibor camp, where the rest of his family died. In the 1943 Sobibor uprising, Chaim killed a guard. He escaped with his girlfriend, Selma, whom he later married. A farmer hid them until liberation in June 1944." USHMM website