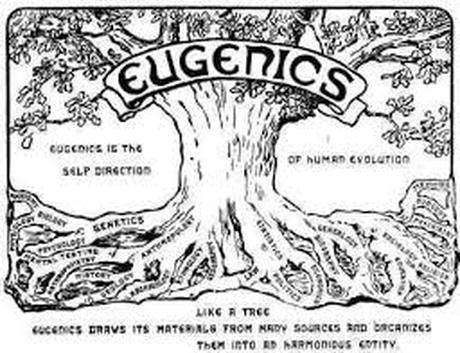 In late 1942, some thought the Sterilization League of New Jersey should give up the cause. It had never accomplished much, and far more organized groups such as the Eugenics Records Office in Long Island and the Human Betterment Foundation in California had already ceased operations.

The group met at the luxurious Robert Treat Hotel in Newark, overlooking the Passaic River. The lobby had "huge columns combined with intricate lighting features over a white marble steps, tile floors, and lavish rugs. There were large palms and potted plants, and writing desks and tables on a balcony for afternoon tea," a history of the hotel reads.

The directors considered several options, including going into limbo for the duration of the war or becoming a national organization. But there were benefits to being the last champions of a seemingly lost cause. Perhaps with nowhere else left to turn, key leaders of America's prewar eugenics movement pledged support, including Harvard anthropologist Earnest Hooton, and California eugenicists Paul Popenoe and C.M. Goethe.

The little group voted for the national option by a 24-1 vote, and among its members were some of the most notorious early supporters of eugenics. Hooton had worked on the "Committee of the Negro" during the 1920s as part of an effort to prove that the black race was inferior, and Goethe had openly praised Nazi eugenics programs.

They had a plan, but not much money. Then Dr. Clarence Gamble stepped in, bringing great wealth and the absolute certainty he was right. Gamble funded the new group (now renamed Birthright) and soon convinced his brother Cecil to make an even bigger donation. In December 1943, the Gamble Family Trust sent a $10,000 check (equivalent to $125,000 in 2011 dollars), and a follow-up letter stressed, "Do not make any mention of the conditions of the gift." A Procter & Gamble spokesperson noted that "Cecil Gamble was on the Board and gave personal money to a wide variety of different causes. These were personal decisions and in no way reflected the opinion of The Procter & Gamble Company."

The pattern of secrecy was repeated many times over the years, part of careful plans to control the identity of prominent donors and the nature of the campaign.


To avoid alerting opponents of eugenics, Birthright collected figures on the number of Roman Catholics in each state. In New Hampshire, sympathizers wanted Birthright information mailed to them in plain envelopes.

Some had tried to raise alarms. A New York Times science editor sent a devastating critique of eugenics to Birthright in 1940, concluding that "the more I go into this subject the more doubts I have." But Birthright pushed ahead, thinking they could avoid mistakes of the past by merging two opposing goals. A draft memo from 1945 suggested helping "the worst type in every social class" to die out—yet not discriminate. It was an impossible balancing act, but it took 20 years for the group to finally accept that.

It is important to keep clearly in mind that a sound sterilization program makes no social distinctions. It is designed to check the reproduction of defectives wherever they may be found, in institutions or at large, in the richest family or the poorest family, without regard to color, race, or religion.

Immediate steps which are needed include: Accumulation in every municipality, county and state of detailed family histories. Only by means of such continuous records can human evolution be intelligently and effectively directed.

Like Gamble, most of Birthright's founders did good things, too. Goethe built public playgrounds for children in California and was a major supporter of the Sierra Club in its early years; Popenoe virtually created the practice of marriage counseling in America and wrote the hugely popular Ladies Home Journal column "Can This Marriage Be Saved?"

In hindsight, the thought that a nonprofit group could promote both voluntary and involuntary sterilization seems absurd, yet the membership showed an admirable balance. If the concern was social justice, one of their members was Eduard C. Lindeman, a professor at Columbia University's School of Social Work. He was also chair of the American Civil Liberties Union Commission on Academic Freedom in 1949. If the concern was racial bias, there was the Rev. Guy Emery Shipler of New York, an early supporter of the NAACP. And for those worried about gender bias, Gamble's partner on the Field Committee was Dr. Robert L. Dickinson, considered by many to be America's first medical advocate for women's sexuality.

But what Birthright's members never seemed to understand was that the careful balancing act fell apart once it moved out into a world filled with racial, gender and disability bias. On paper everything was scientific; in reality there were jagged edges that would hurt people.

Unable to launch a new wave of eugenic sterilization in their home states, Birthright's leaders used the south, midwest and west as testing grounds, hoping to create a model for the entire nation. Iowa and North Carolina were chosen for the first intensive campaigns, and fieldworkers met with doctors, social workers and public officials to lay the groundwork for expanded sterilization of "the unfit."

In 1945, a fieldworker reported that an Iowa State Psychologist ordered the sterilization of two girls at a training school even though their IQs were in the 80s—far above even the then-current crude definition for the mentally handicapped. "This has never happened before in Iowa, and I now hope a precedent has been established, that it will continue, and many of these girls can be included," she wrote.

Victims of the program felt differently. In North Carolina records from the Eugenics Board show an entire family traveled to Raleigh to protest the operation in 1945, to no avail.

"Sally has never been a filthy girl," Sally's mother said. "She has just been overworked more than anything else."

"Suppose the girl was to marry and have children, do you believe she could care for them?" asked board member Dr. R.T. Stimpson. "I do," her mother replied. "She is the best child I have got, and let me tell you, a mother that has raised a large family don't want their children sterile, because I know she don't need it."

"We are looking after the welfare of the patient and the public, too," Dr. F.L. Whelpley of the State Hospital in Goldsboro added. "If Sally had children, two or three might have to go to institutions."

"I don't see why she needs no sterilizing," her cousin said. "She stays at home and works all the time. Sent her over here (the hospital) because she worked too hard."

"I never knew hard work made people nervous," Stimpson said. "You just never done any," the cousin replied. "Try it and see."

"What does the patient have to say?" Stimpson asked. "I don't want it. I don't approve of it, sir," Sally said.

"If there is anything else you want to say, feel free to speak," said Clifford Beckwith, who was representing the attorney general's office. "I hope you will see how she is needed at home," the father replied. "We feel this is the best way to go about it," Beckwith said.

"I object to it," Sally's father said. "I need her at home to help save the garden. Got an acre in tomatoes and such stuff."

"We believe this is the quickest and surest and only way to get her back where she will be satisfied," Beckwith said. "She could go ahead and get married and be happy just as much as any other person and not have children."

"I don't want a sterilize operation," Sally said. I think I am getting along just fine. I help them over there. Treat them nice. I don't approve of it. Give me a trial. Let me go home, see if I get along all right."

"Is there anything further to say?" Beckwith asked. "If you would stop this and let me go home," Sally said. "Have mercy on me and let me do that." "If there is nothing more you wish to say we will send you a notice of the Board's decision," another Board member said. "She has never been a filthy girl," the father said. "No suggestion of that was made," Beckwith replied. "What is decided will be our best judgment."﻿
Powered by