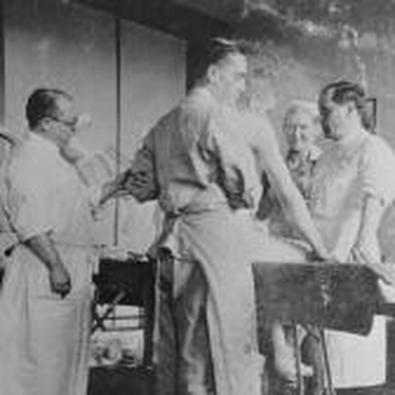 Dr. Carl Clauberg (left) with his staff in the operating room in Block 10, Auschwitz.

Instytut Pamieci Narodowej
INTRODUCTION
"Between 1939 and 1945, at least seventy medical research projects involving cruel and often lethal experimentation on human subjects were conducted in Nazi concentration camps. These projects were carried out by established institutions within the Third Reich and fell into three areas: research aimed at improving the survival and rescue of German troops; testing of medical procedures and pharmaceuticals; and experiments that sought to confirm Nazi racial ideology. More than seven thousand victims of such medical experiments have been documented. Victims include Jews, Poles, Roma (Gypsies), political prisoners, Soviet prisoners of war, homosexuals, and Catholic priests."

"The Medical Case, the first of twelve subsequent Nuremberg proceedings tried by the American Nuremberg Military Tribunal, began on October 25, 1946. Twenty-three physicians, scientists, and other senior officials in the Nazi medical administration and the army were put on trial. Seven of the accused were sentenced to death and executed; nine were sentenced to long prison sentences; and seven were acquitted. Several major perpetrators were never tried for their crimes, among them Josef Mengele, doctor at Auschwitz-Birkenau, who escaped to South America; and Horst Schumann, who was judged physically unfit to stand trial in the 1960s."
USHMM WEBSITE

TRANSCRIPT
"Here the lateral soleus muscle which gives the calf its graceful curve. Follow the leg, here's the medial, here's the lateral. The lateral gives, the lateral...the graceful, normal curve. Now, the neurological examination. Will you please try to do this. The patient is unable to totally flex the foot, to elevate the foot upwards. Try to do it on the other side, if you will. Just show that you understand please. Like this. Up. Now, try to do it here. Okay. Dorsiflexion is completely gone."


"I offer this X ray as prosecution exhibit number 215."

"The, uh, most remarkable finding in, findings in Miss, Miss [Jadwiga] Dzido's case is, at first, marked atrophy of the right leg, including thigh, leg, and foot. Would you, please stand up, and will you gradually turn around? Very slowly turn around. You can compare here the two legs, and you notice the marked atrophy. You see the femur of this bone, of this leg, as compared to the other. ...without tendinous insertion. You can see this tendon here, strong tendon is absent on this side. ...show blueish discoloration, including, uh, indicating interference with circulation of the leg, probably due to loss of blood vessels."

"The Medical Case was one of 12 war crimes trials held before an American tribunal as part of the Subsequent Nuremberg Proceedings. On trial were doctors and nurses who had participated in the killing of physically and mentally impaired Germans and who had performed medical experiments on people imprisoned in concentration camps. Here, concentration camp survivors Maria Kusmierczuk and Jadwiga Dzido, who had been victims of these experiments, show their injuries to the court as evidence."  USHMM Website
Powered by