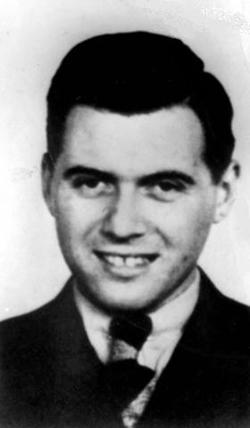 Josef Mengele was an SS physician,
infamous for his inhumane medical
experimentation upon concentration camp
prisoners at Auschwitz.
Background
Born on March 16,1911, in Günzburg, near Ulm, he was the eldest son of Karl Mengele, a prosperous manufacturer of farming implements. In 1935,     Mengele earned a Ph.D. in physical anthropology from the University of Munich. In January 1937, at the Institute for Hereditary Biology and Racial Hygiene in Frankfurt, he became the assistant of Dr. Otmar von Verschuer, a leading scientific figure widely known for his research with twins.

Early Involvement in the Nazi Party
In 1937 Mengele joined the Nazi Party. The following year, the same year in which he received his medical degree, he joined the SS. In June 1940, Mengele was drafted into the army, and thereafter volunteered into the medical service of the Waffen-SS (Armed SS). Although documentation is scant and often contradictory regarding Mengele's activities between this time and early 1943, it is clear that he first functioned as a medical expert for the Race and Settlement Main Office [Rasse- und Siedlungshauptamt, or RuSHA] in summer 1940 at the Central Immigration Office [Einwandererstelle] North-East in Posen (today Poznan) and thereafter served as a medical officer with the SS Division “Wiking” (SS Pioneer Battalion V), with which he saw action on the Eastern Front.

Wounded while on campaign, Mengele returned to Germany in January 1943, and began work at the Kaiser Wilhelm Institute (KWI) for Anthropology, Human Genetics, and Eugenics, directed by his former mentor von Verschuer. In April of 1943, he received a promotion to the rank of SS captain; this advancement shortly preceded Mengele's transfer to Auschwitz, on May 30, 1943.

Making a Reputation
During his infamous tenure at the concentration camp, Josef Mengele was not the only physician at Auschwitz, nor was he, as common wisdom often maintains, the highest-ranking physician at the camp; this “distinction” belonged to SS captain Dr. Eduard Wirths, whose position as garrison physician made him responsible in all medical matters for the entire camp complex. Mengele began his career at Auschwitz in the spring of 1943 as the medical officer responsible for Birkenau's “Gypsy camp”; several weeks after its liquidation, Mengele undertook a new position as Chief Camp Physician of Auschwitz II (i.e., Birkenau), in November 1943, still under Wirths' jurisdiction.

The Angel of Death
Approximately 30 physicians served at Auschwitz during the period in which Mengele was assigned to the camp. As a requisite feature of their “rounds,” medical staff performed “selections” of prisoners on the ramp, determining from among the mass of humanity arriving at Auschwitz who would be retained for work and who would perish immediately in the gas chambers. Known as the “Angel of Death,” or sometimes as the “White Angel,” for his coldly cruel demeanor on the ramp, Mengele is associated more closely with this “selection duty” than any other medical officer at Auschwitz, although by most accounts he performed this task no more often than any of his colleagues. Undoubtedly, this association is partially explained by his postwar notoriety, but the ubiquitous image of Mengele at the ramp in so many survivors' accounts has also to do with the fact that Mengele often appeared “off-duty” in the selection area whenever trainloads of new prisoners arrived at Auschwitz, searching for twins.

Experimenting With Twins
Mengele had become interested in utilizing twins for medical research through Verschuer, famous for experimenting with identical and fraternal twins in order to trace the genetic origins of various diseases. During the 1930s, twin research was seen as an ideal tool in weighing the variant factors of human heredity and environment. Mengele, with his mentor, had performed a number of legitimate research protocols using twins as test subjects throughout the 1930s. Now, at Auschwitz, with full license to maim or kill his subjects, Mengele performed a broad range of agonizing and often lethal experiments with Jewish and Roma (“Gypsy”) twins, most of them children.

Other Medical Interests
He had a wide variety of other research interests, including a fascination with heterochromia, a condition in which an individual's two irises differ in coloration. Throughout his stay in Auschwitz, Mengele collected the eyes of his murdered victims, in part to furnish “research material” to colleague Karin Magnussen, a KWI researcher of eye pigmentation. He himself also conducted several experiments in an attempt to unlock the secret of artificially changing eye color. Less famously, he zealously documented in camp inmates the progression of the disease Noma, a type of gangrene which destroys the mucous membrane of the mouth and other tissues.

Mengele firmly endorsed the doctrine of National Socialist racial theory and engaged in a wide spectrum of experiments which aimed to illustrate the lack of resistance among Jews or Roma to various diseases. He also attempted to demonstrate the “degeneration” of Jewish and “Gypsy” blood through the documentation of physical oddities and the collection and harvesting of tissue samples and body parts. Many of his “test subjects” died as a result of the experimentation or were murdered in order to facilitate post-mortem examination.

Mengele's Work with Other Physicians
Like most “scientists” at work in the concentration camp environment, Mengele enlisted the aid of trained medical professionals among the prisoner population to perform the more grisly, or mundane, tasks and to carry out autopsies upon his dead victims. We owe much of our early knowledge of Mengele's activities at Auschwitz to Dr. Miklos Nyiszli, a prisoner-physician who assisted Mengele under duress, and then published his experiences, initially in his native Hungarian, in 1946. (His Auschwitz: A Doctor's Eyewitness Account appeared in English in 1960.)

Post-War
Josef Mengele had hoped to use the “research” he had garnered in Auschwitz in order to produce his Habilitation, a second, post-doctoral, dissertation required for admission to a university faculty as a professor in German-speaking lands. He never accomplished this objective. Instead, in January 1945, as the Soviet Army advanced through western Poland, Mengele fled Auschwitz. He spent the next few weeks at the Gross-Rosen concentration camp, until its evacuation, and then made his way west, to evade capture by Soviet forces.

In the immediate postwar, Mengele found himself in US custody. Unaware that Mengele's name already stood on a list of wanted war criminals, however, US officials quickly released him. From the summer of 1945 until spring 1949, the physician, under false papers, worked as a farmhand near Rosenheim, Bavaria. At that time, his prosperous family aided his emigration to South America. Mengele settled in Argentina.

Life on the Run
As his crimes had been well documented before the International Military Tribunal (IMT) and other postwar courts, West German authorities issued a warrant for Mengele's arrest in 1959, and a request for extradition in 1960. Alarmed by the capture of Adolf Eichmann in Buenos Aires in that same year, Mengele moved to Paraguay and then to Brazil, spending the last years of his life near Sao Pãolo. In declining health, Mengele suffered a stroke while swimming at a vacation resort near Bertioga, Brazil, on February 7, 1979, and drowned. He was buried in a suburb of Sao Pãolo under the fictive name “Wolfgang Gerhard.”

In 1985, German police, working on evidence they had recently confiscated from a Mengele family friend in Günzburg, located Mengele's grave and exhumed his corpse. Brazilian forensic experts thereafter positively identified the remains as Josef Mengele. In 1992, DNA evidence confirmed this conclusion. Mengele had eluded his captors for 34 years.   USHMM website

LIBERATION OF AUSCHWITZ
POLAND, 1945
Click here for video: http://www.ushmm.org/wlc/en/media_fi.php?MediaId=174
VIDEO TRANSCRIPT:
Among the 2,819 liberated Auschwitz inmates, there were 180 children; 52 of them were under 8 years of age. How could they survive this hell? They managed to survive because they were wanted for medical research instead of mice and rabbits. But the German murderers with medical degrees were only keen on a particular kind of children: they wanted to experiment on twins. Twins were a special research material of Doctor Mengele and Doctor Schmidt's. Children who did not belong to that category were simply murdered.The infants were known by the numbers on their little hands.Soviet troops entered the Auschwitz camp in Poland on January 27, 1945.
This Soviet military footage shows children who were liberated at Auschwitz by the Soviet army. During the camp's years of operation, many children in Auschwitz were subjected to medical experiments by Nazi physician Josef Mengele.
Powered by