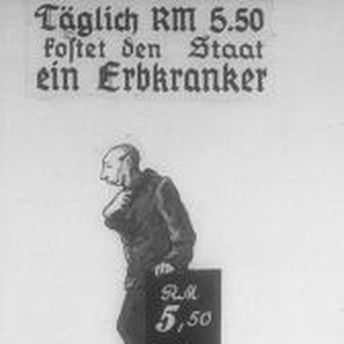 "It was only through the political work of Hitler that the meaning of racial hygiene has become publicly manifest in Germany, and it is only due to him that our thirty-year-old dream to put racial hygiene into practice has become a reality."
— Ernst Rüdin, 1934
INTRODUCTION
"On July 14, 1933, the Nazi government instituted the “Law for the Prevention of Progeny with Hereditary Diseases.” This law, one of the first steps taken by the Nazis toward their goal of creating an Aryan “master race,” called for the sterilization of all persons who suffered from diseases considered hereditary, such as mental illness, learning disabilities, physical deformity, epilepsy, blindness, deafness, and severe alcoholism. With the law’s passage the Third Reich also stepped up its propaganda against people with disabilities, regularly labeling them “life unworthy of life” or “useless eaters” and highlighting their burden upon society."

" Just a few years later, the persecution of people with disabilities escalated even further. In the autumn of 1939, Adolf Hitler secretly authorized a medically administered program of “mercy death” code-named “Operation T4,” in reference to the address of the program’s Berlin headquarters at Tiergartenstrasse 4. Between 1940 and 1941 approximately 70,000 Austrian and German disabled people were killed under the T4 program, most via large-scale killing operations using poison gas. (This methodology served as the precursor to the streamlined extermination methods of the “Final Solution.”) Although Hitler formally ordered a halt to the program in late August 1941, the killings secretly continued until the war’s end, resulting in the murder of an estimated 275,000 people with disabilities."   USHMM website
Powered by