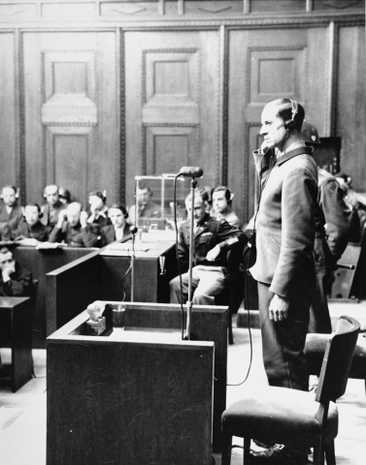 
"...In 1942 Hitler for the first time established a medical and health official under his direct control. This official was the defendant Karl Brandt. A Hitler decree of July 1942 (NO-080) gave Brandt the title Plenipotentiary for Health and Medical Services, and empowered him to carry out special tasks and negotiations with reference to the requirements for doctors, hospitals, medical supplies, etc., between the military and civilian sectors of the health and sanitation systems. Brandt's role, therefore, was to coordinate the requirements of the military and civilian agencies in the field of medicine and public health.


Dr. Karl Brandt had been the personal physician to Hitler since 1934. He was only 38 years old at the time he assumed the important duties conferred by the 1942 decree. His rise continued.


In September 1943 Hitler issued another decree which gave Brandt the title of General Commissioner for Sanitation and Health and empowered him to coordinate and direct the problems and activities of the entire administration for sanitation and health. (N0-081.) This authority was explicitly extended to the field of medical science and research.


Finally, in August 1944, Hitler appointed Dr. Brandt Reich Commissioner for Sanitation and Health, and stated that in this capacity Brandt's office ranked as the "highest Reich authority." (NO-082.) Brandt was authorized to issue instructions to the medical offices and organizations of the government, to the party, and the armed forces, in the field of sanitation and health."  USHMM website
Powered by